By Beth Stone and Bradford King – 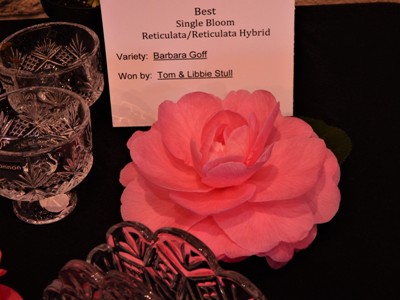 George Lewis donated a perpetual trophy to the Southern California Camellia Council which was awarded at Council shows beginning in 1987.   The George Lewis Trophy is a 14” diameter sterling silver bowl on a wooden base.  The base reads like a “Who’s Who” of Southern California Camellias with an engraved name plate for each exhibitor who won “Best of Show” for their blooms from 1987-2004.  With only one trophy, many thought it was unfair for natural blooms to have to compete with treated blooms for best of show. At times, different head judges decided to have the judging team vote on just natural blooms; other years both treated and untreated. This controversy was finally resolved by the addition of a second trophy in 2002, a crystal bowl on a wooden base, for best treated bloom.  As time wore on, there was consensus within the members who put on the shows, that having a “Best of Show” was more trouble than it was worth. Controversy aside:  One winner reminisces about the year he was awarded the George Lewis trophy. “It was a high honor, and I can recall distinctly the particular winning flower and the elation experienced in winning. I thought it was a high honor, and that the value was greater than the inconvenience.” Another member recalls that “George was much beloved”; and a third “The winner was given the trophy to take home to display for one year”.  It was a real honor to win. Awarding the best of show continued to honor George Lewis who was loved by all….”

George earned a degree in Botany from Hampton University and was a U.S. Army veteran of World War II. He joined the Los Angeles County Department of Arboreta and Botanic Gardens in 1957. In 1970 he came to Descanso as assistant to then-superintendent Mark Anthony. Lewis became superintendent when Anthony retired in 1974 and continued in that job until his own retirement in 1990. During those years Lewis brought many changes to Descanso. Working closely with the Guild and staff, he helped design display beds and established the first formal Spring Show with its mass plantings of tulips along the promenade. Lewis founded the “Plant Prop” program and spent many years teaching hard-working volunteers how to propagate and grow a wide variety of plants.

The people who won the George Lewis trophy the last ten years it was awarded were the best growers of show camellias of that time and their winning blooms pictured here are examples of these outstanding natural varieties.

The Southern California Camellia Council voted fall 2017 to reestablish “Best of Show” at the Council show in 2018 and award the Lewis Cup to the best natural camellia bloom at the show. Tom and Libbie Stull won this prestigious award at the 2018 Council show with a magnificent bloom of  ‘ Elegans Splendor’.  They also won in 2019 with a gorgeous  ‘Barbara Goff’.